It seems like a lifetime ago, but it was only this year that Learning to Skateboard in a Warzone (if you’re a girl) won the Academy Award for Best Short Documentary. The film, which focuses on a group of girls in the Back-to-School program in our Kabul Skate School, has led us on an extraordinary journey as it has inspired people all over the world.

A couple of weeks ago, we were delighted to attend a screening of the documentary, hosted by our long-term partner and friends, The Skateroom. They hosted the screening in Brussels and it was a sell-out event, with over 150 people attending. As well as showing the film, they also held a panel discussion which included the Founder of The Skateroom, Charles-Antoine Bodson; Clara Bardiau, Social Impact Manager at The Skateroom; Skateistan Executive Director, Oliver Percovich and our Programs Director, Talia Kaufman; as well as Christo Velkov from Special Olympics Europe and Eurasia and His Excellency Dr. Nazifullah Salarzai, Ambassador of the Islamic Republic of Afghanistan to the Kingdom of Belgium, the European Nation and NATO.

The Skateroom has been supporting Skateistan for over six years and they have become an integral part of what we do. Through their innovative art for social impact model, they combine the beauty of iconic art with support for social skate projects, like Skateistan. They are generously supporting the build of the skatepark at our new Skate School in Bamyan, Afghanistan through a special edition with Raymond Pettibon.

"Skateistan is our oldest and long-term partner, and the reason why The Skateroom was initially founded. We wanted to show their impact in Afghanistan to our community, and this heartwarming documentary is the best way to do that and illustrate the importance of their work. We are proud to be collaborating with such a system changing organization."
Charles-Antoine Bodson
Founder, The Skateroom

Learning to Skateboard in a Warzone (if you’re a girl) is available in the US on A&E Networks and Hulu; in Australia on SBS and in Latin America on Lifetime. You can watch the trailer here.

If you’re inspired by our work and you’re in a financial position to do so, please consider making a donation today. 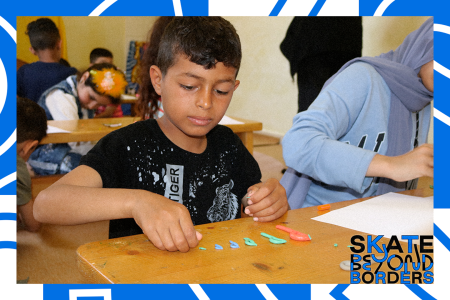